DJ: The Dog Who Rescued Me 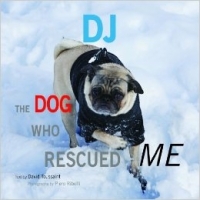 DJ: The Dog Who Rescued Me

David Toussaint and I met at the AR Conference 2013 where I first learned of his relationship with his dog, DJ, and of the inspiration DJ has given to David and many, many others.

David began his career as a writer with a very well received book on planning the perfect gay or lesbian Wedding.

"Comprehensive, fresh, and funny, Gay and Lesbian Weddings covers everything you need to know to plan the wedding of your dreams.Unlike other wedding planners, this one tackles the issues your heterosexual friends never had to consider. For instance, do you come out to Aunt Gloria before she receives the invitation and the shock of her life? Which father of the bride pays for a lesbian wedding? Who walks down the aisle first? Is it possible for members of the wedding party to be happy with what you force them to wear? (Okay, this is a universal problem.) Step-by-step and down-to-earth, Gay and Lesbian Weddings includes advice on every aspect indigenous to gay and lesbian couples soon to be wed."

David's books were hugely successful and David was caught up in a frenzy of appearances, interviews and excitement.  This, as with all good things, came to a gradual end and David found himself feeling deflated and depressed.  The fervor was over and David now pondered what he could do to make his life more fulfilling.   Always an animal lover, he had fallen in love with Pugs in college. He began to consider becoming an animal guardian. He knew little of pet store animals or puppy mills, but he did his research and read every book he could on "animal parenting" hoping to provide the best home possible for his new dog.  After preparing himself and his home, DJ came, and life was never the same for David. Not only was David so busy with the new puppy to be depressed, he was also busy creating a new life -not even aware that it was happening.

A resident of New York city for 20 years David realized that he never had any real interaction with his neighbors  -even those he saw on a daily basis and never went out of his way to get to know those in his area.  Beginning with the "summer community" and through trips to Central Park with DJ this soon changed.  DJ loved everyone  -the four and two legged friends he met -and soon they were David's friends as well.  He met the barber, the florist, the guardians who lived near him, and the homeless. He began to stop worrying about what he did not have and, as animals do, began living in the moment. Socializing, making new friends, finding his selfless side made David a better and, certainly, happier man.

People enjoy and appreciate DJ: The Dog Who Rescued Me because it appeals to everyone - all races and ages, any sex and encompasses the concept of antispeciesism.

The book ends when DJ is 6 years old.  He is now 8, and as loved, vibrant and happy as ever.  Always an inspiration to David and to all those who meet him.

DJ: The Dog Who Rescued Me chronicles David Toussaint's life with his six-year-old pug, DJ. In this ten-chapter photo book, a poignant tale is told, through Toussaint's words and Piero Ribelli's beautifully expressive photos, of how the love of an animal brought Toussaint out of depression and gave him a new appreciation of his neighborhood, New York City, and the world around him.