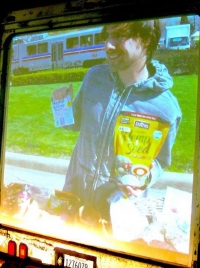 You know it’s bad when industrial agriculture has garnered enough scrutiny that state legislatures are scrambling to pass “Ag-Gag” laws to criminalize taking video footage of confined animals on factory farms. The news on bee-killing pesticides, the massive amount of greenhouse gas emissions attributed to animal-Ag, and the obesity epidemic has not been flattering for big-Agribusiness. Hence support is going up for energy efficient agriculture systems that provide whole foods directly to people. Currently, some 80% of Ohio agricultural products are processed into corn and soy derivatives or fed to animals. It doesn’t seem like responsible land use to Plant Kingdom Bakery owner, Jeremy Koosed, who studied land-use planning at the University of Akron before going on to processing a distinct line of Hemp seed snack foods.

Corn and soy crops going to feed animals trapped on factory farms are largely Genetically Modified and dependent on agri-chemicals. “Whatever your tastes, making greater use of plant protein sources like seeds, nuts, and whole grains makes a big dent in correcting a situation that degrades our land and produces massive amounts of animals manure that frequently runs off into rivers, choking out aquatic life.

Hemp seed, an ingredient many Ohioans have become acquainted with, provides substantial nutritional value and nutty flavor to foods like Plant Kingdom’s well-known energy bars. Owner, Koosed spends a lot of time at farmers markets and community events reminding people that his foods will not get anyone buzzed. Nor will they cause failed drug tests. “That’s an important assurance because so many people get drug tested at work. But that’s totally not a thing, we’ve got police officers, service members, a great variety of hard-working folks enjoying the seeds.” A long-standing pledge from Hemp foods industry regarding drug testing is made via the website www.testpledge.com

While hemp has no drug value, it has all sorts of nutritional value. It’s a raw-nut source of complete protein is known for being satisfying and easy to digest, with negligible allergen potential. What’s more, Essential Omega fats in Hemp seed are proportionally balanced to match our nutritional needs. Flax seed and fish are also sources for omega 3 fatty acids but Hemp oils’ usefulness in making salad dressings gives it a culinary edge, without needing to further  deplete fisheries.

In contrast with Plant Kingdom’s commercial success in the healthy snacking arena, several key politicians who have been far less enthusiastic than the hundreds of thousands of their constituents who have purchased Hemp seed foods. “Public officials give pathetic excuses as to why they don’t have a position on the Hemp farming issue, why it’s not worth their time, and it all shows a lack of principle. It takes more energy to come up with vague statements behind a “non-position” position than it does to say YES OR NO.”

Mainstream concerns, like the desire to live harmoniously off the land, are compelling people to support Hemp. It’s not just that people believe in the potential for this crop, that potential is already here to witness. Hemp is a fast growing sector in Canada where Hemp farming has been permitted since 1998. Costco joined traditional health food stores in offering Shelled Hemp seed in 2012. Popular Ohio-owned coffee shops such as Phoenix in Cleveland, Nervous Dog of Summit County, and Coffee Emporiums of Cincinnati have served tens of thousands of Plant Kingdom Hemp energy bars to the public.

Despite growing demand, Ohio’s bureaucrats are busily fashioning our state as a welcome mat for factory farms instead while maintaining prohibition on Hemp. It gives us reason to compare Hemp to other development sweeping rural communities. Fracking for natural gas and factory farming livestock both negatively impact property values and present numerous public health threats. Yet we have huge branches of State Government (Agriculture and Natural Resources depts.) working hard to facilitate these industries. It shows a betrayal of rural America that the Gov’t works to ensure that crop and product diversity are suppressed.

One barrier politically for Hemp may be that Reps. don't see Hemp as fitting into their ego/persona of who they think they are. It's not their "passion". So instead of supporting Hemp because it’s the "representative” thing to do, they are ambivalent. They think this is safe territory. With this malaise come a vicious cycle of missed opportunity: Politicians think we are too stupid to understand the issue and worry they will be misunderstood, misrepresented, and smeared for supporting hemp. So instead of educating people as to why a policy is worth supporting (how it serves society etc.) we’re missing the potential economic innovations for farming and improved public health in favor of shallow cowardice. How insulting too, can you imagine politicians saying “my district is too stupid to understand”?

Ohio House Minority Leader, Armond Budish, has written to Plant Kingdom that "this simply doesn’t have strong enough support to justify taking it up". This kind of laziness does not serve our agricultural economy. Would we ever hear someone saying “too few people practice X religion to justify making it free” or “X Company supports only a few jobs so let’s constrict their growth so as to suck potential out of their American dreams. Then we can not subsidize them like we do polluting agribusiness and instead bring federal charges against them for cultivating a controlled substance.”

It’s a fallacy that because a minority of us make use of hemp products, that justifies maintaining prohibition. A minority of people eat ducks too. Representatives in government “don’t have time to take this up” but government does have the authority to prosecute people for growing a crop our ancestors relied upon heavily.

Despite the unfairness of Hemp prohibition, Plant Kingdom is completely buoyed by plenty of positive feedback that the Hemp foods are satisfying, energizing, and adequately nourishing. Owner Jeremy remarks “It’s important to keep in mind that a lot of what we can hope to accomplish is simply improving people’s lives and wellbeing. Really there’s no greater outcome more sincerely worth working towards”.

Jeremy Koosed is operations manager at Plant Kingdom.  The bakery provides a delicious array of bakery containing hemp and many other nutrional and delicious ingredients.  Jeremy always has some of his creations on hand to share. Jeremy believes in  strengthening connections with eachother and earthly systems that sustain life. "I believe in not hurting animals and composting. The Hemp industry is the best thing going!"