Personhood Beyond the Human 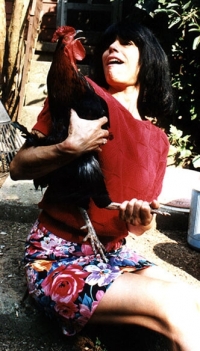 The above report, by conference speaker George Dvorsky on last weekend’s Personhood Beyond the Human conference at Yale, reveals the growing support among ethicists, lawyers, scientists and others for changing the status of nonhuman animals from one of legal thinghood, with no rights, to a status of personhood with a capacity for legal rights. The Nonhuman Rights Project, founded by attorney Steven Wise, who spoke at the conference, is breaking the ground on legal rights for nonhuman animals, for whom, he says, “The passage from thing to person constitutes a legal transubstantiation.”

While nonhuman primates were the focus of the conference, reflecting the Nonhuman Rights Project’s lawsuits on behalf of chimpanzees, as a speaker I seized the opportunity to shine a light on chickens in my Sunday, Dec. 8 presentation, “The Provocative Elitism of ‘Personhood’ for Nonhuman Creatures in Animal Advocacy Parlance and Polemics.” A summary of my talk and others’ talks can be read at http://nonhumanrights.net/abstracts. Conference photos appear at http://www.flickr.com/photos/nonhumanrights/sets and video of the conference will soon be online.

Since a criterion for “personhood” is often cited as a nonhuman animal’s demonstration of self-recognition in a mirror and related signs of self-awareness, I read aloud the following excerpt from my essay The Social Life of Chickens which I distributed to the audience:

Chickens in my experience have a core identity and sense of themselves as chickens. An example is a chick I named Fred, sole survivor of a classroom hatching project in which embryos were mechanically incubated. Fred was so large, loud and demanding from the moment he set foot in our kitchen, I assumed he’d grow up to be a rooster. He raced up and down the hallway, hopped up on my shoulder, leapt to the top of my head, ran across my back, down my arm and onto the floor when I was at the computer, and was generally what you’d call “pushy,” but adorably so. I remember one day putting Fred outdoors in an enclosure with a few adult hens on the ground, and he flew straight up the tree to a branch, peeping loudly, apparently wanting no part of them.

“Fred” grew into a lustrously beautiful black hen whom I renamed Freddaflower. Often we’d sit on the sofa together at night while I watched television or read. Even by herself, Freddaflower liked to perch on the arm of the sofa in front of the TV when it was on, suggesting she liked to be there because it was our special place. She ran up and down the stairs to the second floor as she pleased, and often I would find her in the guestroom standing prettily in front of the full-length mirror preening her feathers and observing herself. She appeared to be fully aware that it was she herself she was looking at in the mirror. I’d say to her, “Look, Freddaflower - that’s you! Look how pretty you are!” And she seemed already to know that.

Freddaflower loved for me to hold her and pet her. She demanded to be picked up. She would close her eyes and purr while I stroked her feathers and kissed her face. From time to time, I placed her outside in the chicken yard, and sometimes she ventured out on her own, but she always came back. Eventually I noticed she was returning to me less and less, and for shorter periods. One night she elected to remain in the chicken house with the flock. From then on until she died of ovarian cancer in my arms two years later, Freddaflower expressed her ambivalence of wanting to be with me but also wanting to be with the other hens, to socialize and nest with them and participate in their world and the reliving of ancestral experiences that she carried within herself.

An article about the conference in The New York Times, “Considering the Humanity of Nonhumans,” Dec. 9, quotes another attorney on the Nonhuman Rights Project and the prospect of consideration of personhood in chickens or rats:

“It’s simply too much to ask of a judge, especially at the trial level, said Lovvorn in WIRED’s in-depth analysis of the lawsuits. Judges might be reluctant to consider claims that might invite consideration of personhood in chickens or rats. They might just feel, in a primal, gut-level way, that legal rights are for humans.”
____________

Imagine if such defeatist views had prevailed during the Civil Rights and Suffragist Movements in the 20th century and the Gay Rights Movement in the 21st. Fortunately, they did not.
– UPC.

Founded in 1990 by Karen Davis, United Poultry Concerns is the world's foremost non-profit organization dedicated to promoting the respectful treatment of domestic fowl. UPC runs a haven for chickens in Virginia, and also teaches people about the egg and chicken meat industries, the natural lives of free chickens, pleasures and benefits of human-chicken companionship, and alternatives to chicken farming and the use of chickens in education and scientific experimentation. – Dr. Annie Potts, Chicken, 2012  Please visit Karen's site at: http://upc-online.org/   Karen would especially like to have thought given to how we celebrate "Peace on Earth" this time of the year in regard to the Turkey.  Please read this book from Karen, and become aware.  http://upc-online.org/more_than_a_meal.html   Also, you may purchase Karen's other work at this site: http://upc-online.org/merchandise/