by Mary Finelli and Fish Feel 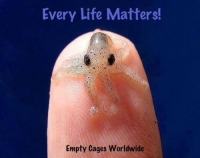 Fish Feel is the sole organization devoted exclusively to promoting the recognition of fish as sentient beings deserving of respect and protection. Despite fish constituting the largest category of animals used for food (including as farmed animal feed), and despite huge numbers of fish harmed for research, "sport,"and aquaria, their well-being receives very little attention, including by the animal protection community.

Fish Feel primarily serves to help educate the public as to why these animals are deserving of our appreciation, the immense problems caused by their exploitation, and how we can help them.