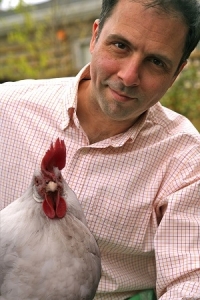 Robert Grillo is a dedicated savior to many animals, and spreads the word on animal rights, quite effectively, through his site, Free From Harm.  Please visit and share this great forum.

It’s entirely understandable that the Romani people would want to close down the pig factory farm and build a memorial in its place. What’s quite startling is that nowhere in the news coverage I’ve seen is there any mention of the obvious irony in one oppressed group reviling, rather than recognizing, the nonhuman animal victims of the currently unfolding atrocity. No one wants to see the pattern.

The Lety pig farm has been operating on the site of the former Nazi concentration camp since the late 70s.

One can only assume from the words of the protestors that they do not object to exploitation, killing and consumption of animals; they just don’t want it happening on the site where their ancestors were exploited and killed. However, the lesson of the Holocaust would teach us that if exploiting and killing others based on their race is immoral and unconscionable, then so too is it wrong to persecute others based on their species. The apparent denial over the victimization of animals in this case is the same form of denial that led to the Nazi Holocaust.

Gwendolyn Albert, a member of the Roma Civic Association Forum, told the Czech press that “Everyone who lost someone at Lety, myself included, asks how it is possible that such barbarism can be perpetrated in a civilized state today. The memory of the victims is being desecrated by pig feces.” But the chilling reality is that the legacy of suffering of the victims is alive in the victimization of still others on the same soil.

Another protestor was quoted as saying: “As long as a pig farm stands on a Romani Holocaust site, we should not be surprised when some Czechs today give the Nazi salute in front of Romani homes, transformed into human beings full of hatred and incomprehension under the leadership of neo-Fascist fanatics. The Lety pig farm is a gauntlet thrown into the main square of Czech society, which must now take it up!” Yet for animal advocates, the presence of the pig farm on a former concentration camp site does not surprise us at all, since the connection between the two forms of oppression is clear and undeniable.

The UN Human Rights’ Committee has asked the Czech government to close down the pig farm, which was built on the site of the camp by the communist regime in the 1970s and has been a source of state embarrassment since 1989. The presence of the farm has sparked heated controversy, and state officials argue that buying the farm from its present owners and removing or relocating it would be too costly. More than 1,300 Romanies were held prisoner in the camp between 1942 and 1943. Over 300 Romanies died there, others were transported to Nazi extermination camps. (1)

“The problem of the concentration camp at Lety is not just a problem of the Czech Republic, but has a Europe-wide dimension,” reports Romea.cz, a Czech news site. Indeed the problem is a universal one. We cannot continue to ignore and sanction through our silence and denial the systematic enslavement and killing of some, while condemning the same for others. As Leo Tolstoy famously wrote, “Where there are slaughterhouses, there will be battlefields.”

Robert Grillo is the founder and director of Free from Harm, a 501c(3) non profit that seeks to change society's attitudes about violence and oppression by leveraging the most powerful advocacy tool we have: our forks. He is the author of over 500 articles on Free from Harm and is particularly interested in the intersection of food choices and popular culture. He shares his life with a flock of rescued hens and a rescued homing pigeon. You can email Robert at robert@freefromharm.org.

View all posts by Robert Grillo →