Vegan Outreach: On the road with Victor Sjodin. 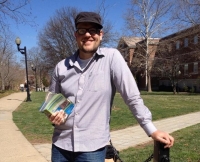 Victor Sjodin (32) is no stranger to road-trips. In fact, he has been on the road for months at a time since the summer of 2008. The reason? To reach as many College students as possible, and teach them about Veganism: the doctrine that man should live without exploiting animals, defined by The British Vegan Society, in 1951. Veganism has also been defined as the practice of abstaining from the use of animal products, while rejecting the commodity status of sentient animals. In 1960, The American Vegan Society, linked Veganism with the concept of Ahimsa: the avoidance of violence against living beings.

Victor started as a community organizer in Philadelphia, working on events, campaigns and issues such as: Book through Bars, Critical Mass bike rides, and Food Not Bombs; fundraising for political prisoners; Humane League’s foie gras ban (in which 52 out of 56 restaurants dropped foie gras); protests against the animal testing laboratory Huntingdon Life Sciences; and participating in the direct rescue or adoption of several hundred dogs, cats, laboratory rats, chickens and a pig. He spent three summers touring for Vegan Outreach at the annual Warped Tour, educating concertgoers on the horrors of factory farms, and helped coordinate state-based ballot initiatives. In 2011 he joined the national nonprofit Mercy For Animals for a 42-city, three-month tour on a specially outfitted video truck showing the documentary “Farm to Fridge” to the public.

Presently, Victor is an important member of Vegan Outreach, a volunteer based - nonprofit organization, with the mission to expose and end cruelty to animals at factory farms, by promoting Veganism through the widespread distribution of a 16 page-fully illustrated color booklet. Victor alone has given out 600,000 of these booklets at more than 450 Colleges throughout the 48 continental States in the US, Mexico and Canada.  Victor explains “colleges, concerts, and festivals are great places to do outreach. College students tend to be open minded, more willing to change and have more meals ahead of them, so it is an ideal demographic to do outreach to”.

He recently ended a journey that went from January 20, 2013 and ended on May 03, 2013. His trip started in Texas, followed by Louisiana, Mississippi, Kentucky, Tennessee, Indiana and ended in Ohio. According to studies performed by the Humane League, you could double the amount of animals saved each year, by leafleting between 75 to 100 booklets, than you could save by just practicing Veganism.

Anyone can leaflet, if you want to participate in this effective activism, contact Vegan Outreach at these websites:www.veganoutreach.org or www.adoptacollege.org. You could help save between 100 and 1,000 animals per year!

It has been proven that leafleting is one of the most effective form s of  advocacy, and Victor is a true testimony that "getting the word out" does matter. Monica is a dedicated and true vegan,  a defender of animals, active in the animal rights community, and is an independent licensed Wildlife Rehabilitator.