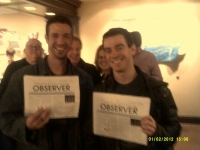 A large crowd filled the Capitol Theater in Cleveland Heights on Sunday, April 28th for the screening of River Fire Film's "Guilty 'Til Proven Innocent".  The film deals with the controversial topic of breed specific legislation - focusing on specific dog ownership cases, a dog warden whose tactics the filmmakers find questionable at best, city officials, animal advocates, and the city of Lakewood which has outlawed the ownership of Pit Bulls.  What became very apparent, as the film progressed, is the obscene amount of false identification of the Pit Bull.  Many other dogs with similar physical characteristics of this breed often suffer, along with their human companions, hardships, abuse and even death. It also became very apparent that the Pit Bull is still stereo typed and that many people's beliefs regarding this breed are highly inaccurate.  This is a very sad situation for the Pit Bull and for those who love them. The crowd was very interactive as the film progressed - applauding statements they agreed with, "booing" those they did not agree with, and voicing affirmation for many points the film the made.  It was obvious that the majority of those in attendance agreed with the film's director, producer and editor, Jeff Theman and assistant producer and editor, Bryan Porter.  Following is a brief explanation of why these two young men decided to tackle this controversial topic.

"I don't think anybody one day wakes up and says, "I'm going to be an advocate."  For me, it just sort of happened by accident. I've been a dog lover ever since I can remember, and have shared my home with all sorts of breeds and mixes. It wasn't until I started this film in 2007 (initially an anti-dogfighting documentary), that I got firsthand experience of these ridiculous laws called breed specific legislation. In early 2008, I visited  For The Love of Pits, a Cleveland Pit Bull rescue, to get information. Since my only experience with Pit Bull dogs was from a few friends that had them, my knowledge about the dogs was minimal. I, unfortunately, bought in that these dogs were different, and thought my friends had the "good ones." But, being a dog lover, I still recognized the abuse, and felt it was unfair. In a matter of minutes, I noticed a little black dog, Preston, who I immediately fell in love with, and made my intentions known of my plans to adopt. Soon after, the city I lived in, (Lakewood, OH) proposed and passed a ban of Pit Bull dogs, which prohibited me from bringing this beautiful dog with a zest for life home. I had to pick up and move out of the city, which I did without batting an eye. From there, it became my mission to learn everything I could about the issue, to ensure reputable accuracy in the film, and leave no doubts about the injustice to both the dogs, and the people who love and share their homes with them. To think, I started out with the thought these dogs were different, but realized along the way, these dogs are just dogs, and somehow an advocate was born."

Many experts featured in the film lent credibility to the facts regarding Pit Bulls and dispelled many of the antiquated myths surrounding this breed.  The advocates and pet owners themselves, along with a very disturbing police video, shed light on the inacuracy of Pit Bull identification and the need for better education on this breed - especially for those who are enacting laws to ban them from their communities.

For further input from the film's team you can visit:

Thank you to our friends, Badges for Bullies - defenders of the Pit Bull and protectors of all animals - for sponsoring this film and to the Colony Theater for hosting the event.